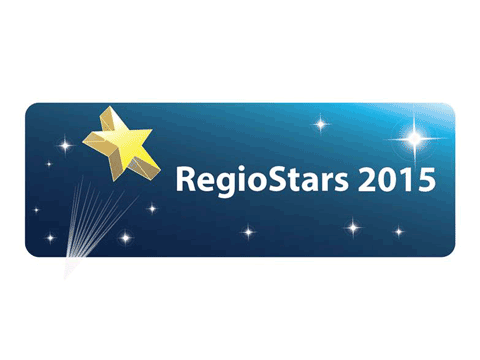 The objective of RegioStars 2015 is to identify good practice in regional development and to highlight original and innovative projects or support schemes that could be inspiring to other regions and project managers. Eligible projects or support schemes have been co-financed by the European Regional Development Fund, the Cohesion Fund, the European Social Fund, or the Instrument for Pre-Accession Assistance.

There are four RegioStars Award categories for 2015:

The European Commission announced on the 26th june the finalists for the RegioStars 2015 awardss,  17 finalists from 143 entries on the basis of four key criteria:

The finalists come from regions and cities in 15 Member States: Austria, Bulgaria, Czech Republic, Denmark, France, Greece, Hungary, Italy, Ireland, Poland, Portugal, Romania, Spain, Sweden, and the United Kingdom. The four final winners will be announced during the 2015 OPEN DAYS event in Brussels from 12 to 15 October 2015.

Commenting on the selection, European Commissioner for Regional Policy Corina Creţu said, “I congratulate all finalists, as those projects selected by the Jury serve as best practices examples for other regions and cities of the kind of investments we want to see more in the future. This year’s finalists are model projects in SME growth, energy efficiency, social inclusion, and urban development, all with the aim of improving the quality of life of their citizens. Being a finalist for the RegioStars Awards is not only a quality label designating a great project, it is also international recognition for regions and cities for their innovative and creative approaches in the use of EU funds.”